»Resonance is the only manifestation in physics which combines giving with taking, where giver becomes taker and taker becomes giver.«

Resonance Spectral Tuning is therefore – just as did the famous old masters of the art of violin making – specialized in improving the processes of the resonance and has thereby developed the system of Resonance Spectral Tuning. With its help the settling time of the plate vibrancy has been shorted tremendously and a wide band resonance effect has been realized. This site introduces the revolutionary Ignatius technique which has revolutionized the field of room acoustics.

The stage of culture casinos Bern has a new floor for several weeks. It consists of soundboards, which has developed a tinkerer from the Black Forest to improve the acoustics in concert halls. The reactions of musicians and conductor of the Bern Symphony Orchestra are euphoric. To explain the secret of this success, however, is not easy … 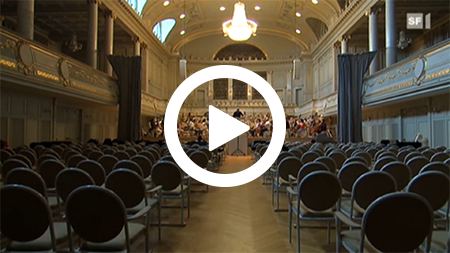 “Soundboard dumbfounded musician-ears” of the program “Einstein” on Swiss television from 26.01.2012. The article illustrates the work of the company Georg Ignatius and its effect in action.