The International Festival of Colmar is held annually in Colmar.  This is a music festival that brings together a number of high-profile classical concerts, and according to the “New York Times” has counted among the ten best festivals in Europe since 1994. Each year, highly-talented musicians of the classical music scene give performances here.  At these occasions, the churches and chapels of Colmar serve as venues. As beautiful and rich in atmosphere as concerts in churches may be, so problematic can they be in terms of acoustics. The organizers of the festival, therefore, turned to Georg Ignatius. Because the space cannot be permanently altered, transportable and flexible wall and floor resonators, which can be installed or removed as needed, in addition to some fixed Georg Ignatius elements, are used above the stage of the St Pierre Chapel. In this way, churches are quickly transformed into concert-compatible music halls that do justice to the high acoustic requirements of the music. 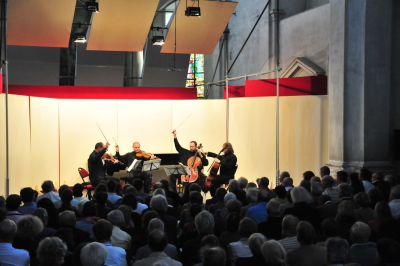