»Claudio Abbado accepted this event only on the condition that the resonators for the acoustical optimization would be installed both above the stage and on the back wall, just like at his concert with the Gustav-Mahler-Youth-Orchestra in September last year«
W. Dobler, “Albert Konzerte”, concert promoter

The convention centre inaugurated in 1996. The concert hall which is home to the SWR Sinfonieorcheser Baden-Baden and Freiburg has room for up to 1744 persons within 1000 m2 (11000 square feet). After the opening concert by the Berlin Philharmonic Orchestra, there was great excitement because they had massive complaints about not being able to hear each other on the stage. Since also others performers, promoters and especially the SWR Sinfonieorchester joined in these complaints, comprehensive tests were conducted with Ignatius-Resonators.

Statement by Mathias Weigmann, orchestra manager of the SWR Sinfonieorchester:

»Because the higher frequencies are over-proportionally reflected, the sound of the orchestra is brilliant but tends to sharpness… The pronounced reverberation causes the separate parts to become blurred… A bigger problem is that the musicians can hardly hear each other on stage.«

Statement by Mathias Weigmann, orchestra manager of the SWR Sinfonieorchester:

»… The sound of the orchestra became more transparent and rich, the strings sounded warmer, the brass lost their sharp edge. The hearing problems on stage seemed to be solved. The sound in the hall was amazingly well balanced. The tone carried noticeably better which was good for the audience in the back rows. These results were an improvement for the audience and the acoustics in different sections of the hall were better balanced. …«

After the successful tests, Ignatius won the contract to correct the acoustic problems in the hall. 30 transparent spectrally tuned circular Ignatius-membranes were hung above the stage. A further 12 mobile Ignatius-Resonators for placement behind the musicians were also provided.

After the final Ignatius-Installation the Badische Zeitung wrote:

»An absolute miracle”, exclaimed one of these musicians who in 1996 in their first appearance in the new hall, had desperately tried to improve the acoustics himself with the help of table tops and blankets. And after the concert, it was not only one person who spoke of an definite improvement. For the audience in the hall, above all, it has become much easier to hear from where each individual sound occurs. With closed eyes, the alert listener can point out precisely where each instrument or group of instruments is placed. Aside from that, the orchestral sound has become considerably richer. The quick, hard reverberation of the instruments near the organ free “organ screen” has disappeared.«
Rolf Müller, Badische Zeitung 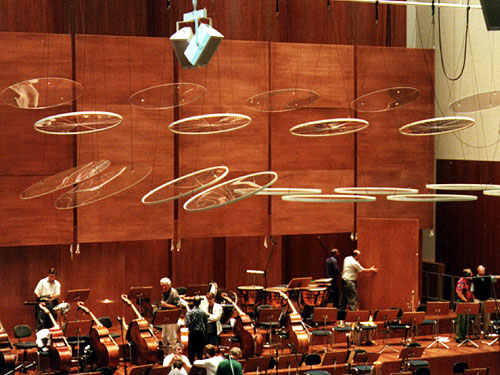