Under the project management of the architect Christian Töchterle-Knuth, a RESPA platform floor was installed for sound optimization as part of a redesign of the Helmut Koch Hall, which serves the Rundfunkchor Berlin as a rehearsal room. The extremely flexible RESPA technology could also be technically and optically easily adapted to the needs and wishes of the architect and the musicians. The result captivated both musicians and conductors as well as the acousticians of MMT network.

Installation of the custom-made RESPA boards 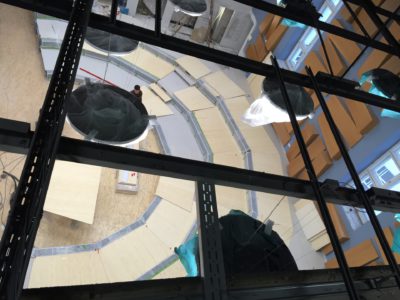 The covering made of RESPA resonance panels, shown in red 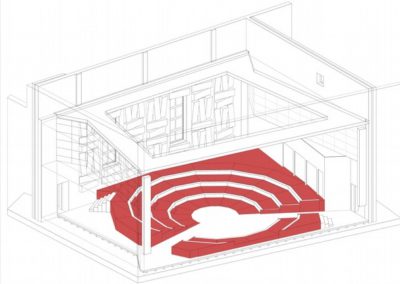 Voices for the sound alteration of the hall

I could well imagine playing concerts in the Helmut-Koch-Saal, also using it as a chamber music hall for small ensembles. – Jörg Schneider, Bass, Rundfunkchor, Berlin.

The hall has a clear, transparent sound. The positions are well balanced dynamically …. For the singers themselves, it was very difficult before, for example, when it comes to intonation,  you have to be able to hear each other really well. And that is so much better now than before. – Gijs Leenaars, Chief Conductor, Rundfunkchor, Berlin

I am absolutely thrilled with our new hall. The singers can now hear each other much better (…) and also the conductor can hear the singers much better than before. – Simon Halsey, Honorary Conductor, Rundfunkchor, Berlin

You sing more consciously, the singing did not change, but the awareness about singing did. We have these special boards that we sit on; the whole floor is made of them. This is actually a quite normal floor, not visually recognizable, but really good for perceiving sound. It sings much easier. – Sören von Billerbeck, Bass, Rundfunkchor, Berlin.