»In the meantime and independently of one another, many persons playing the great organ in the concert hall of the Trossingen Music Academy were able to confirm the enormous efficiency of the Ignatius-Resonators. The tones have much more resonance and the sound of the organ is therefore much more present in the hall. These effects are proven by measurements thus being as objective as possible.«
Professor Christoph Bossen, head of the organ department

This project was characterized by a complete lining of the inner surface of the organ case with Ignatius-Resonators. The measurements had been organized so that Prof. Bossert played the same musical passages before and after the Ignatius-Installation. The audio recordings of this were later measured and scientifically evaluated by Attila Viranyi, sound engineer at the Freiburg Conservatory, with the help of FFT Spectral Analysis System.

The red measuring curve shows the frequency characteristic after the Ignatius-Installation. Well visible is the relatively dramatic gain in the overtone range. 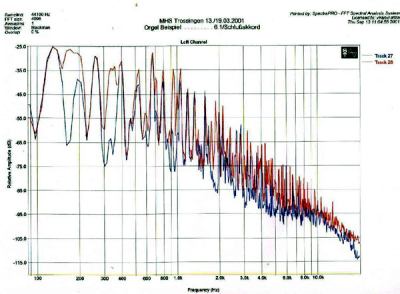 Music example: Standing forte chord Obvious are the level differences in special frequency ranges and the much more linear frequency response with the help of Ignatius (red curve) 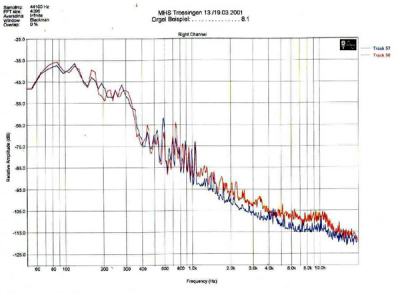 Music example: Short piano passage Obvious is the generally significantly higher level from 1000 Hz. upwards (red curve with Ignatius), which verifies that the resonance of the Ignatius-elements support the development of overtones.